My Brief Spirit Airline Review for 2015

Below recounts my experience with budget airline, Spirit. This is a Spirit Airline review for 2015 including my first few experiences with them.

Flying just about every month for full price and not on mistake airfares were starting to take a toll on my wallet. Having heard about Spirit a couple of years ago, I never really considered them an option since they fly out of Latrobe, Pennsylvania – about 45 minutes East of Pittsburgh. Looking at where Spirit flies from, I’m surprised they chose Latrobe (LBE) and not Pittsburgh (PIT). I’d be willing to bet the leasing of a jetbridge is significantly cheaper at LBE than PIT. But, that’s a whole other topic for another day.
From talking to friends, I always heard more negative than positive with their experiences. Perhaps that’s because the rest of the Internet seems to agree with the same points they brought up. Everything costs money – water on board, printing tickets at the gate, an overhead bag, etc…
Having traveled overseas before, I was accustomed to this model and thought I knew what to expect.
Arriving at Cleveland Hopkins (CLE) Airport around 10:00 with about 60 minutes of time to spare before boarding I walked towards security. I found it odd that I didn’t have TSA Precheck on my boarding pass since I have Global Entry & TSA Precheck [link to precheck vs global entry]. I guess Spirit isn’t a part of the trusted traveller network or I completely missed the place to enter my info. Security was a breeze and I proceeded towards my gate. (If anyone knows about the trusted traveler network and Spirit, please leave a comment below!)
It was too early for lunch, so I sat down and worked on some issues from work outside of what I presumed was the Spirit gate. There were no markings, no gate agents, and nothing to connote that this was, indeed, my flight. Having asked a few people around me, I confirmed this was my gate.
Within thirty minutes of zoning out, everything I had heard from my friends came true. Flight delayed by two hours. Why? Oh, because there was no pilot and flight crew for the aircraft. Eventually the flight was delayed another hour – pushing my departure time back towards 2pm. The most comical part of this was that once the announcement was made, the representative ducked back into the safety of the jet bridge.

One issue with Spirit is that they are not a part of an airline alliance like One World or Star Alliance. This means that if your flight is cancelled or delayed, you will not be rebooked onto another flight by a different carrier. So, you will have to wait for the next Spirit Airlines flight, which could be days apart.
With this small delay, it set the tone to how I expected the rest of the itinerary to be. However, I was quite incorrect.
Aside from being late from the original delay, the Dallas to New Orleans segment went off without a hitch. Then, my return flight from New Orleans to Dallas and Dallas to Cleveland were both fantastic. On the Dallas to Cleveland flight, I was quick enough to be the second to volunteer for an exit row. In order to get an exit row, you just have to be near the gate and pay attention to see if they ask for volunteers. As a bonus – you’ll get ten inches more legroom.
So, as of now, only one out of the four total segments were delayed.
Fast-forward to July when I booked another round-trip ticket with Spirit Airlines. Again from Cleveland to New Orleans with a layover in Dallas.
This time was a little different than the last. When I checked in online, I received two middle seats. Unfortunately being over six feet tall, this becomes a bit of an inconvenience. When possible, I always hope for a window or aisle seat so I can stretch out or at least enjoy the view.
Once I made it thru security at the CLE Airport, I asked the gate agent if I could upgrade to a big front seat for a nominal fee. 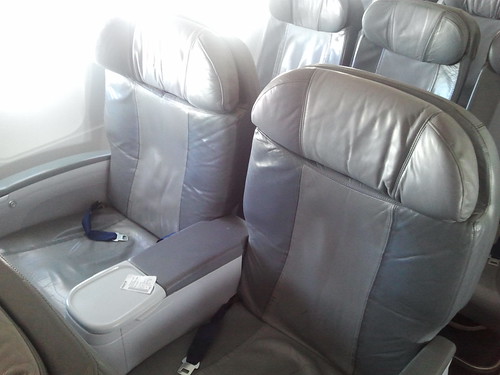 The big front seat is amazing.

If you’re able to afford the varying fee for it, I highly recommend it. You get to be able to stretch out, only share a row with one other person (as opposed to two), and deboard the airplane first.
We arrived in Dallas on time and left for New Orleans on time.
Every experience with Spirit Airlines, except the first, has been on par with the treatment I receive from other national carriers. Sure, you don’t receive complimentary beverage or peanuts or an amazing Biscoff cookie; but, that small difference is perfectly fine with me.
Spirit Airlines is a low-cost carrier and will hopefully remain that way. Traveling lightly and with a minimal amount of luggage is the best way to go.
If you have to be somewhere on-time, bring a ton of luggage, or have never flown budget before; please stick with another airline. I plan to continue to fly with Spirit Airlines and look forward to flying with them in the near future to Central or South America.