When Was Smoking Outlawed on Airplanes?

Smoking on airplanes seems like a commonly known rule when flying on an airplane nowadays. However, it wasn’t always like this. People could smoke on flights up until 2000, but there is a convoluted history from what I’ve read about.

Due to an FAA regulation put into place in 1988, smoking was essentially banned from all US Commercially operated flights. Believe it or not, the same guy that invented the seat belt also advocated the significantly for a smoking ban on airlines, Ralph Nader.

A stewardess helps a flyer light up a cigar midflight.

Prior to this 1988 regulation, United Airlines became the first to implement a smoking ban in 1971. It’s hard for me to imagine an airline that is typically frowned upon for numerous reasons being a leader in banning smoking on flights. As expected, the tobacco companies fought this new rule.

Eventually, Congress stepped in and decided that there could be no smoking on domestic flights with a 2-hour duration or less in 1988. This expanded to cover domestic flights of 6 hours or less in 1990. However, this did not apply to the flight deck. According to sources, the pilots could still smoke because nicotine withdrawal was caused concerns about flight safety.

Smoking on an Airplane

From what I’ve been reading on the web, it is still OK for pilots to smoke in the flight deck. It’s more or less stated in the individual airline company rules – which some are explicitly against smoking while others don’t seem to mind. There are a handful of cases that I’ve read about where the pilots run the show and if they smoke, then the cabin crew can smoke. Flight attendants will pop into the flight deck to get a quick puff and then go about their duties.

Nowadays, smoking on an airplane will cost you a hefty fine.

If you do own your own aircraft, you are able to do as you please it seems. So, those rap videos where you see people drinking copiously and smoking blunts actually is OK – as long as it is your own airplane. There are some verbose rules around this, but simply, you need to have plenty of ashtrays and if there is a curtain separating you from the cabin, you need to have No Smoking signs. 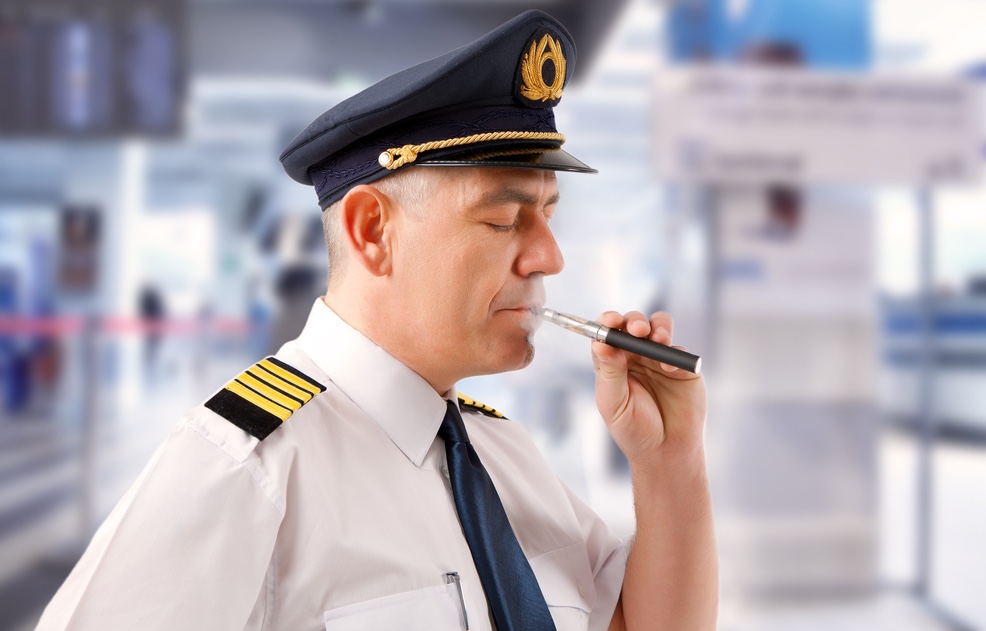 As far as E-Cigarettes or vaping goes – it used to be up to the airline to decide. However, in late 2015, the U.S. Department of Transportation decided to ban eCigarettes from checked baggage and vaping on airplanes. Be sure to have your equipment in you carry on luggage.

One last fun fact is that there was going to be a smoking only airline company, called Smokers Express. Founded in 1993, this airliner was based on a couple premises – people should be able to smoke on airplanes and eat good food (like steak, hamburgers, and pizza). A year’s membership would cost you $25 and would eliminate crying babies on board since you had to be 21 and older to join. Since you haven’t probably heard of Smokers Express, you can imagine that the company didn’t receive enough funding to get off the ground (pun intended).

It’s crazy for me to imagine a time where people could smoke on flights. Whether it was just a little prop airplane going from Cleveland to Detroit or an international flight. It was commonplace for people to just light up mid-flight, thirty-thousand feet in the air.